Chaos is a short animation by Bartlomiej Otlowski. The animation answers the question of what is a difference between chaos and normalcy. The view is just an illusion. It all depends on the perspective. And how to change the perspective? How to turn a fly into a spider? The answer is time and knowledge.

Style of the animation was inspired by Codex Atlanticus, old astronomy books, technical drawings, blueprints, and gears. Leonardo da Vinci plays a special role here. He was the man who is ahead of one’s time. Watching his works you can understand that to find yourself in chaos you should focus on small elements. Find harmony and rhythm. Small elements connected together and overlapped can create things you would never think of.

A first part of the animation I called "enlightenment". A sphere in the first shot represents small, simple, predictable world. We can see that there is something around it but it's blurred and hard to recognize. In the next shot, there are more details. Chaos starts to appear in moving lines and the sphere is less noticeable. It's harder to focus on the one element. On the other hand, everything moves regularly. Regularly like a moving gear which is shown in the further part of the movie. Even complicated things are made step by step. You have to focus on the small things if you want to achieve something big.

The second part is a tribute to a great mind - Leonardo Da Vinci. A man who was ahead of one's time. He was misunderstood by many. For people without his knowledge, his notes were incomprehensible. As if that was not enough Da Vinci wrote most of his personal notes using mirror writing. Pure chaos. In the animation, you can see references to the flower of life, the perspective of shadows, golden ratio and perpetual motion from Codex Atlanticus.

This turned out amazing Bartlomiej! Congratulations! Great use of camera shapes and great connection with the audio! 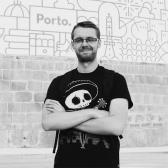