"What got you into motion design?"

I've always been interested in animation as a medium. I used to make stop/go animations when I was younger. I think I was interested in it at first because I had ideas for videos I wanted to make, but I felt frustrated by my lack of resources. I didn't have a good camera, or people who could act out the parts I wrote, or a set or lights etc. etc. But with animation, I didn't need anything except a camera that could take photos and objects on hand, or pieces of paper to draw on. It felt both limitless and accessible in a way that regular video didn't.

Recently I was inspired by companies like Golden Wolf. I stumbled across their work on Instagram and was OBSESSED. The fluidity of the motion, the cheeky, clever little details that you might miss if you blinked at the wrong moment - everything about their work sang to me. I've been doing more and more animation work for various jobs, so I thought it was time to learn how to do it properly. Up to now everything has been bootstrapped, which seems like a common theme among people who become interested in motion design. YouTube and Creative Cow have been excellent teachers, but after just one lesson I'm already thrilled with this class.

One piece in particular that I have been obsessing over recently is Raman Djafari's video for Snow. The story is a "spiritual journey", but it's very abstract and hallucinogenic. The audio is lyricless, almost ambient, but it alters from one minute to the next, which gives the animation impetus to change from one scene to another. The main thing I love about this video is the flow. I almost don't even want to call them "transitions," because the transitions are the main part of the video. The focus is on how the animator takes us from one scene to the next. Even though the drawing style changes occasionally, the video is held together but a unified color pallette. (Excuse the typos.)

I went in without much of an idea/objective and kept drawing things until it was long enough! 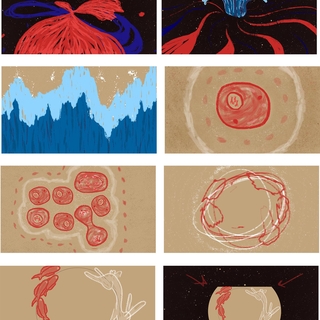 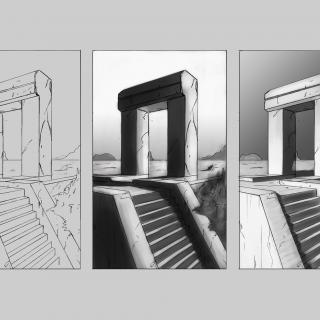