The Hallow. America, the early 1700s. A land surveyor loses his bearings during a blizzard. Utilizing his unique skills, he must fight back against nature to return home.

I felt attracted to this sample because the description reminded me of The Revenant which is a movie I loved a lot when I first saw it. Because the film takes place in the 1700s I thought I'd start by looking at the use of type during that period, I looked up what typefaces were created around that time and looked at a lot of documents and artwork from that time.

I settled for and Old Style typeface, Adobe Garamond Pro.

For extra credit I picked three of my favourite pieces of tv and film and I followed the same process as I did with The Hallow.

Elementary is a tv series based on the the stories of Sherlock Holmes written by Sir Arthur Conan Doyle. For Elementary I thought at first a serif typeface would be a nice nod to the time Conan Doyle wrote the series so I had in mind Caslon, Baskerville, Mrs. Eaves (based of Baskerville) and Times New Roman but since this is a modern adaptation I decided to look towards DIN 2014, Franklin Gothic, Trade Gothic and Neue Haas Grotesk. Finally I picked DIN 2014 because of its simplicity and technical/hard data associations which suited the show.

Desert Hearts is a 1985 independent film made by Donna Deitch based on the novel "Desert of the Hearts" by Jane Rule. Adrian Frutiger designed Avenir in 1987, two years after Desert Hearts was realeased; I thought the typeface's simple forms and its name, which in french is means something like "times to come", suited this film and its groundbreaking qualities: it was a queer film about two women, entirely independent, written by a queer woman and directed by a queer woman.

DCs Legends of Tomorrow is a tv series based on several characters and comics by DC. This show is super quirky and weird and fun in a great way. Since the show is already weird, like I said, I thought translating that into the typeface used in the credits would be too much. Keeping it simple seemed like the way to go and so I picked ITC Avant Garde Gothic Pro, which given all the time traveling shenanigans in the show feels apt.

The process I followed:

1. Layout the cast and crew names in different weights according to the chosen typeface. I picked the weight that I thought best suited the theme of the film/series.

2. I would play with different cases, lowercase, uppercase and small caps. I settled on using small caps for names and titles.

3. Next up I would make changes to the size and alignment of the type, see how it looked when I made someone's title smaller than their name using a rule of contrast of 1:2 or 1:3 sometimes 1:4 or how it would looked aligned to left, right or center.

4. When I was happy with size and alignment, I would tweak the tracking and the leading using the same rules of contrast as before. 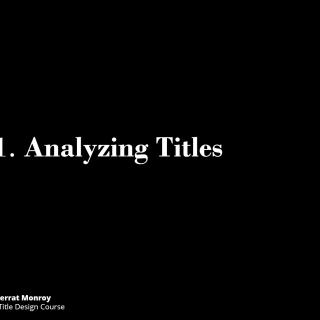