My idea for the image is: A post-apocalyptic future where most of humanity left the earth already and now the people left behind are trying to scrap together enough parts for a spaceship so they can leave the earth before it's too late.
So I want to show people rummaging and scrapping together parts from crashed spaceships, satellites, etc.

In the beginning I was too focused on one idea already and that caused for a lot of "same" like thumbnails.
The problem started at my reference board, the idea that I had was a bunch of scrappers in a post apocalyptic future looking for
salvage among the wrecks of vehichles, structures, etc.
Now looking back on it, I should have had way more different types of wrecks/vehicles so that I had more shapes and ideas to explore.

I also think that a lot of my composition is too "safe" and that I should explore more. The overall lighting in the thumbnails
and shapes in the ground is also too much the same.

I mainly used the graphic brushes, but I should also use more different kinds of brushes to allow for happy accidents.
Also the pieces without a character are a bit boring to me and doesn't sell the story that I want.

The next day I made an extra batch of thumbnails to feel out the process a bit more, I wanted to be faster because during my first batch some thumbnails took around 20min and I really wanted to push more towards the 5min mark. The next day wasn't a great day for me, the thumbnail quality wasn't great and the ideas didn't really flow all that well. But because of that day I did learn that If I take a bit more time than just 5min the image quality and idea improves a lot.
I guess it's just a matter of getting used to this process and then in time my speed and quality will improve.

I really like this approuch to thumbnailing, you can get an idea down pretty fast and really focus on what's important in the image.

Here is the second batch of thumbnails I did on the day after the first batch, during this time I also adjusted my main reference for more different types of wrecks/debris and added a sky ref.

After looking back on my first batch and comparing it to Steve's thumbnails, I noticed my thumbnails didn't have as much black in it, so when I was starting on the second batch I wanted to have more black in it and also push the shapes/wreckages a bit more.

Here I also added the self critique/refinement of the thumbnails that I liked. 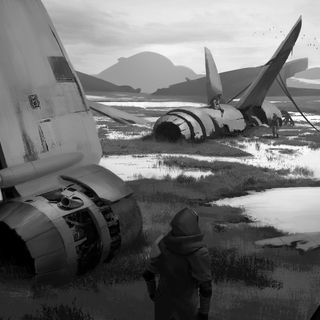 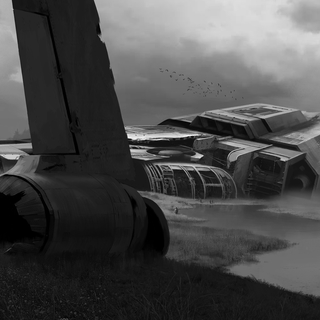 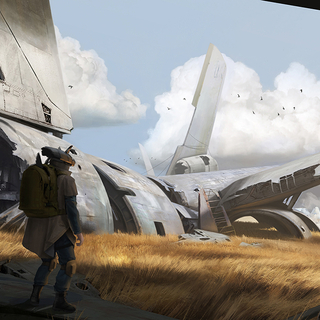